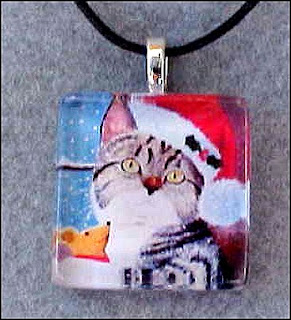 In my mind there's a feeling of snow in the air and a fresh scent from the pines and the trees have shed their leaves and are settled down for their Winter nap. Well, that's in my mind anyway...having spent the first half of my life in the northeast. Here, we almost hit 90 degrees on Thanksgiving Day. :-)

In spite of the warm climate I love this time of year. In the past 10 or so years I was so super busy at this time of year....rushing around packing and shipping out items...trying to keep billing straight, seemed like I was always at the post office...knew them all by first name. I remember days when I was up long hours trying to keep everything straight. These days (yawn) I spend long hours watching TV or Netflix and walking or exercising. Days are not busy anymore...just like most small sellers on Ebay our days are filled with time to spare. One wonders how much this loss of traffic and loss of buyers costs Ebay. Does anyone have figures on it? I know they have figures on Amazon and their amazing third quarter profits but does anyone keep track of the loss of revenue at Ebay?

I did see many Ebay TV ads yesterday and hope it helps the small sellers this year. One can only hope. As for me...my mind is set toward the holidays and the happy feeling among people during the holiday season. I hope everyone has a great holiday season and enjoys every day of it.

My image for today is actually a glass pendant made from my painting "Santa Gave Me This".
Posted by ms.pat at 11:56 AM No comments: 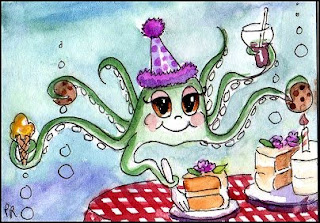 Its been yet another "down" year for many of Ebay's small sellers. Many left and will not return - either listing elsewhere or giving up online sales altogether. In reading back posts I came across this one that bears a repeat:


"I roam Ebay's discussion boards and was really taken by this posters offering. It came directly from the heart and so I asked this seller, Ebay ID subay, for permission to publish it here:

I know you probably don’t want to hear this. I mean, you don’t really like to talk about our relationship. Not anymore, anyway. But things have been happening lately – things have changed. YOU’VE changed. And after this last incident, I just can’t keep on going along as though everything is still fine.

We’ve been together for, what, over ten years now, isn’t it? I remember those early days so well. Even way back then, a lot of people were talking about you, and you sounded so cool, I decided I had to introduce myself. It was love at first sight. We had so much fun back then, didn’t we? You opened up a whole new world for me. And you were so talented! A little rough around the edges, sure, but right from the start it was clear you’d be a star someday. But I didn’t love you just for that, not just for what you did. I also loved you for who you were. Or who I thought you were. You seemed to care about people, about bringing them together to create something new, something amazing! You had a gift and you shared it. It wasn’t all about the money, back then. And I felt like we were a team, you and me, building this world together. We did, you know… build it together. These days I think you forget that.

I guess I should’ve expected it. What a cliché, right? “Fame changes people.” You’re a really big deal now, a household name, even. And while you became a big star, I just stayed the same person I always was. I was enough for you, back at the beginning. But now you think you need to be with someone flashier, someone who can doooo more for you. Even though you’re supposedly committed to me, nowadays you’d rather be with other celebrities, and you haven’t exactly been discreet about it.

I know, I know, you say that’s not true, that you still care about me. That there’s still a place for me in your world. But we both know that’s not true. That might be what hurts the most, that you can’t even be honest with me about it. You’re doing that thing, that coward’s-break-up thing. Maybe you’re too uncomfortable with the awkwardness, or maybe you’re afraid of what your public will think of you if you unceremoniously dump the person who’s supported you for all these years. For whatever reason, you can’t bring yourself to end it cleanly. Instead, you’ve just started mistreating me, making me work harder and harder to be with you, and then blaming me for every little thing that goes wrong when I do. And finally you’ve spelled it right out… you tell me that from now on, even when everything I do is “Satisfactory,” you will not be satisfied. Technically, you haven’t broken up with me. But how could anyone stay in a relationship like that?

So I guess what I’m saying is, it’s time for me to move on. Not today… honestly, I’m still sort-of reeling from your latest “announcement.” I don’t know where I’m going yet. Maybe I’ll have to go it alone for a while. You know I’ll miss you terribly. We’ve been through so much, and you’ve been an important part of my life over the last decade. But somewhere out there, there’s another auction site who will appreciate me, and who'll treat me the way a seller should be treated. And we both know that I deserve that.

Take care of yourself. And try not to forget who helped you become a star. As for me, I will always remember the good times,

I have not checked on subay - I hope she is doing well.

Another Sunday, this one special for me because its also my birthday. Since it is a birthday I have been reflecting on the past year and wondering what the coming year will hold.

Painting for today - since its my birthday is the Octopus Birthday Party.
Posted by ms.pat at 8:52 AM No comments: