Can it be true? I sure hope not...but then Ebay left sellers kind of wide open for this kind of scam. You can stop by Auctionbytes.com and read all about it. A seller posted on ebay's Seller's Central that he received an email from the winner of one of his auctions. The email said he and five of his friends won auctions from this seller and they would each give the seller a negative if the seller didn't cough up 20.00 per auction for five auctions. Unreal! I don't think ebay saw something like this coming. Whether its true or not - it IS spreading because I hear there were similar letters posted on the Powerseller's Board but I can't check on that. I have checked the one on Seller Central and there were already almost 400 posts from worried sellers!

Ebay - what next? I expect perhaps the FBI might step into this one if there is any validity to it.

Life After Ebay - Is it Possible to Break the Ebay Habit?

Well, my last three auctions are winding down and I do not intend to list anymore of them. I think I'm still in shock over what ebay has done to a lot of good sellers. They are sweeping them out right along with the bad sellers - and they are giving OUR buyers the power to do it for them. I can't think of a lower operation right now...so I try NOT to think of them.

However, I could use some help in breaking the Ebay habit. This blog is one of the ways I am trying to reach out to the buying public to let them know that my website is fully stocked and I stand ready to bend over backwards to please my customers. Its what I've done for 10 long years on ebay - the only difference is on my website there is no bidding. You even get to pay with Paypal if that's how you want it.

I have no idea if anyone is reading - I rarely see a comment. I don't know how to market this site - if anyone stumbles by and reads this and has suggestions, please leave them for me. Help me break that ebay habit. The way I see it every sale made off ebay is money that will not reach the monster's pockets.

Another sample of my ACEO's above
Posted by ms.pat at 1:40 PM No comments:

Hey Ebay - Its Time To Pick Up My Marbles 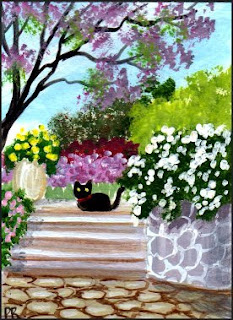 This year has been a nightmare for sellers on Ebay - just yesterday as I watched my listings roll off without bids and few views I sadly decided it was time for a change. Oh, I'm listing on other sites but its so hard to break oneself of the habit of ebay. It was grand while it lasted and for me, it lasted 10 years. I don't know what Mr. Donahoe is doing. Hope he knows because nobody else does and all they can do is guess. In the meantime, life goes on and since those ebay sales were supplementing my retirement I have to find other ways to make up the loss. I've been working hard on my own website. You can find it at:

I've also put in a section for hot new ACEO collectibles. I've always sold so many of them on Ebay but...nevermind...that was a different time and place and I must move forward. My new ACEO section:


Come by and take a peek. I put in a Paypal shopping cart so it won't seem so alien to me afterall.

Patricia
Posted by ms.pat at 10:21 PM No comments:

From an Ebay Seller to Ebay Buyers

My performance as a seller is being rated by you. You decide if sellers like me stay or go on eBay. Truth is, anything less than a 5.0 rating lowers my standings in search until I can no longer be found.

Should you find anything wrong with your purchase from me...I stand ready to rectify the situation. Most honest sellers want to keep their good reputations and remain sellers on eBay. Without the cooperation of buyers - that will soon change. Most of us try our best to describe an item properly, to package and ship it carefully. My items are shipped upon payment and at no more than a few pennies above actual shipping cost - yet my stars for shipping time and shipping cost have been damaged.

If buyers don’t begin to communicate their displeasure or the reasoning behind rating a seller at less than a 5.0 then soon all unique small sellers such as myself will be gone from the site. So, I’m asking you to please either contact me with your complaints or rate fairly. Only 5.0 ratings can keep us on this site.

Thank you so much for your understanding,
Posted by ms.pat at 5:28 PM No comments:

EBAY...EBAY...WHAT HAS BECOME OF YOU?

I started selling on Ebay back in 1998...yeah...10 years. In all that time, Ebay became a good solid part of my life. I listed with pleasure always looking for new things to put on auction and making sales was like hitting a win on the slot machines. It was fun and it was so exciting. I met other ebayers - most good people and many I still keep in contact with years later.

My old friend, Ebay, has been slipping for the past few years. A lot of the magic left and Ebay managed to stamp out a lot of it. We could all tell Ebay made some wrong turns and started to become...more and more intrusive. Sales started to slide...listings started to slide, fraud and scamming are rampant. We began to believe Ebay didn't care, they were raking in the money and so they looked the other way. Well, this year things abruptly changed. I can honestly say that since Jan., 2008 my old friend, Ebay, has turned into some kind of huge callous and unfeeling monster. Some sellers will tell you they're getting rid of us all...some sellers will tell you, no they're only getting rid of the bad sellers. Whatever in the world they're doing they sure are keeping it to themselves. Hardly anybody believes the rhetoric coming from management. Ebay has become the 800 lb bully because they say they want to "enhance a buyer's experience"...there are just too many con's to make this a valid reason. They have come out with one rule after another and those combined rules are pushing small sellers into a corner. One negative...one neutral can kill a small seller and ebay has made it known to the buyers. Even going so far as to put a banner up when a buyer gives a seller feedback - letting the buyer know that the seller cannot give them a negative and they should be honest in their feedback....yeah - like that's not a blatant invitation to make sure a buyer knows he can neg a seller with virtually no repercussions. Ebay's buyers will now be Ebay's sellers' executioners! Ebay has effectively driven a solid wedge between buyers and sellers.

On May 19, 2008 the most dreaded change took place. Sellers can now only give buyers positive feedback no matter what a buyer does to them. May 19th will go down as a bloodbath where buyers negged sellers all day long. Some even saying they waited for this day so that can do so without retaliation. The end result - bad buyers are in heaven - wielding that axe against sellers, many times with no good reason...GOOD buyers are appalled - and rightly so. Where does ebay stand in all this? They seem to be becoming the most hated company on the internet. I know of no other with ebay's reputation or their recent cruely to their customers (the sellers who pay them fees in order to list their wares).

Where will it end? What is YOUR opinion - give it here and lets discuss.
Posted by ms.pat at 7:22 PM No comments: