And The Next Governor of California Will Be....Meg Whiteman?????

I'm not that much into politics except when it concerns me directly. Governor of California is an important post and directly concerns my quality of life here....so I'm giving you my 2 cents on the matter.

California under the reins of Arnold Swartzenegger has seen government double...expenses rise outrageously and now, in a time of recession and unemployement equal or better then most of the country, unheard of tax raises!!! Our dear governor who rode in on the promise of cutting the fat and bringing the free spending democratic legislator under control has been one big fat flop! He now stands to levy tax raises on gasoline, sales, cars and a myriad of other taxes to the tune of an extra $12,000,000,000!!!....and that will only partly take care of the deficit! California is hurting badly. They need someone strong and someone who means what they say!

Now along comes Meg. She's probably got time on her hands now that she's groomed John Donahoe and he is in office at Ebay blithely taking apart a business model that was extremely successful and busy putting thousands of small sellers out of business. In all conscience, I fail to see how Meg could brag about her time at Ebay. From its inception until a couple of years ago Ebay was wildly successful. It was a phenomenon like no other. Unique by design and by its users. With all due respect....Daffy Duck could have run it just as well. Ebay made money in spite of the trip ups made by Meg....like dumping millions in sellers fees into China and giving China free listing while raking the money out of all other users. The big bumble called Skype - she paid dearly for that company and took a big loss on it as well! I won't even go into the arrogant treatment of Ebay users - the utter lack of customer service that still exists today. Sellers in particular have been badly treated and that treatment has been magnified 10 fold by her hand groomed predecessor. I could go on and on...but the one thing that stands out above all others is the fact that this lady has shown in deed and action that she could care less about the little people. Well...Meg...California is FULL of little hard working people - not everyone is a multi-millionaire living in Beverly Hills. California didn't deserve Hollywood actors that obviously "acted" their way into office and they don't deserve ex-CEO's that only know what us sellers call "Ebay-speak"! We're in dire straits here - this is no time to take up the California governorship as a hobby!

All California based sellers need to come forward and spread the word!

After that I kind of thing the column needs some serenity. This is a simple watercolor called "California Living". 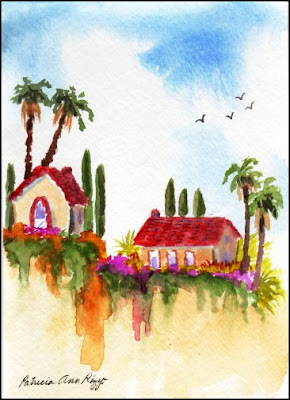