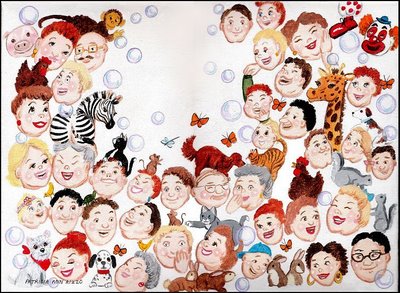 
Where do artists get their inspiration? Various places. I recently was in line at the supermarket and noticed the line of people and saw only their faces. Most were animated and smiling. Later that evening while watching TV I sketched some faces - cartoonish but all laughing. That began my series called "Happy Faces" and I'm pleased to say every one I painted sold and sold well. The last one was actually three paintings and was commissioned by a clinic in Seattle. I hope many spirits will be lifted by looking at those happy faces paintings. The first couple I finished were all faces, but then I decided to paint pets for the people and since there was no real place for them I mostly painted them on people's heads! Chickens, dogs, cats, turtles, birds, squirrels - you name it - even fishbowls with goldfish were all painted on happy faces heads. This is but one inspiration out of millions that an artist can get and run with and build on.


Inspiration is so abundant - not only for artists but for every living soul. Everything you do throughout the day could be inspired by something in your life or something you found in the world. Make the most of it.